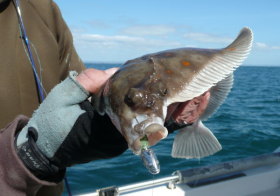 If you follow Fishing Tackle UK, you might have noticed that we got a bit carried away with the LRF (Light Rock Fish) style of ultralight lure fishing last year. It consumed our angling activities and became a constant distraction from other exciting types of fishing. While my passion for LRF continues to grow, at the beginning of 2012 we made an active, healthy, decision to make HRF (Hard Rock Fish) an intended focus this year.

Yesterday, our HRF campaign started – not targeting Wrasse, the mainstay of this discipline, but Plaice!

While I very much doubt we can lay claim to inventing ‘lure fishing for Plaice’, it’s not something I’ve heard about before – consequently I find it exciting. And while I can equally not claim to be an expert on the matter, I have given the subject a fair amount of thought over the past 12 months – since last Plaice season.

So where were our heads at, prior to yesterday? a) Clearly a Plaice is a predator, much like other flatfish found in UK waters including; the Turbot, Brill and even the humble Flounder. b) Plaice are inquisitive. I recall a story a friend told me of seeing a small Plaice swimming up the anchor rope of his boat in 10 meters of water. And c) If you find them at the right time, you can find them competing for food, in large shoals. Seems simple, but these facts have laid heavy on my mind for the past year with the ultimate conclusion being that Plaice ARE an ideal target for lure fishing. 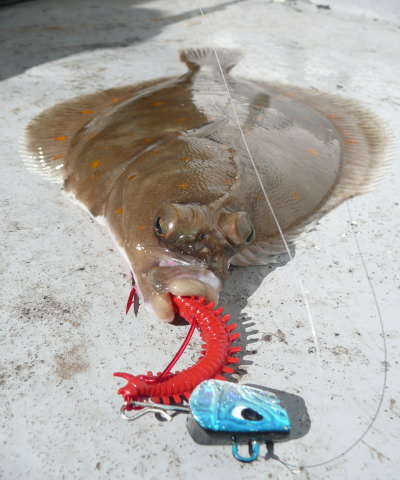 With one false start already under our belts this year, our Plaice fishing from the boat finally started yesterday. We fish mixed ground, essentially dotted with mussel beds. The mark we fished yesterday was between 13 and 17 meters deep. It would be unfishable, with any kind of finesse in anything other than a neap tide. I don’t think the tide inhibits the fish, but success comes from imparting a good action on the lure and having the ability to feel when the fish has the lure in its mouth. We’re lucky having our boat located near some lucrative Plaice fishing grounds, but in reality I can’t see why what follows can’t be replicated in numerous places around the country. In fact, a shallower venue could actually prove to be better/easier/more productive.

There lies the biggest hurdle. Fishing in 17m of water with a 14g jighead is tough. It’s amazing just how much tide there is at traditional ‘slack tide’ when you’ve scaled down this light! In addition, 17 metres of braid really grips the water column. I’ve actually noted the rate of the descent slows, the deeper the lure gets. I’ve put this down to the ‘grip’ or friction of the line against the water surrounding it. Indeed, maybe more to do with buoyancy, but regardless, you need to deal with the effects.

Initially I tackled the problem by fishing dropshot. Thought being that I could fish a heavier weight to get down and stay in contact with the sea-bed, while using slack to impart action on the lure – rather than fighting the sinker. Problem was that in this depth (usually use this tactic successfully in shallower water) the water’s friction/buoyancy combined with the bow of line caused by even a hint of tide meant the rig was always under tension and therefore almost impossible to impart any real action. 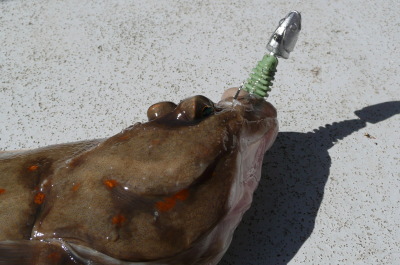 Jigheads were going to be the order of the day.

Note – jigheads over 14g with smaller hooks are hard to come by. We inherit a lot of jig heads meant for Bass and clearly even a small bass can inhale a 4/0. Now although I realise Plaice can expand their mouths considerably, I’d still have more confidence with a hook size between 2 and 1/0. Despite now having a wide choice of jigheads in the UK, I don’t believe many fit those requirements – certainly at the heavier end of the scale.

Far from the ideal, we started with these two set-ups:

Neither looked particularly well balanced out of the water, but worked well within.

We were able to reach bottom vertically below us if we flicked the lures slightly up tide. We could just about feel the bottom if we used our senses and watched the line as well as the feel of the rod. 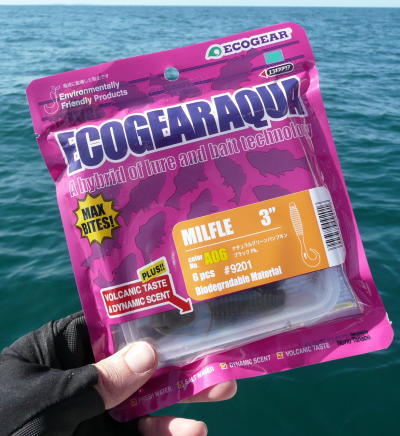 Amazingly, results were instantaneous! The tap-tap signaled the presence of a fish and even at depth the severity hinted at a decent-sized predator. The Ecogear Aqua Milfle was first to land a fish – a beautiful Plaice of around a pound. We were stoked but hardly stopped to celebrate as we knew this wasn’t a fluke and that there were more fish to be caught. The articulated Gulp Sandworm wasn’t far behind in landing a similarly sized fish. I was pleasantly surprised that even smaller Plaice were able to engulf the wide gape hook on a moving bait.

What followed was a special session, that I doubt we will ever forget. We didn’t experiment too much, as what we were using was working well and to be honest, we never really expected the fish to keep coming as long as they did. Bites were plentiful and when we achieved a hook-up, the Plaice fought gallantly on the light tackle. This was as much fun as I’ve ever had catching Plaice before. In fact, more so.

Incidentally, the Marukyu Power Isome worm was my only distraction from the Sandworm. I had two drops and caught one fish so was in no way a fair test – especially as it was realistically too small to fish on the 1/0 Gamakatsu.

On the day, the Ecogear Milfle proved to be the best performing lure. I assume the smaller profile allowed the fish to find the hook point sooner, while it clearly didn’t put the fish off striking. I’m not normally a fan of curl tail grub designs and I have had the thought that the Milfle does look a bit uninteresting in the packet, however it’s clear that Ecogear’s superb design and bait technology excel when it comes to catching the fish, rather than the angler. The limpness of the tail is impressive; the suppleness of the material used allowing the the tail to extend and quiver at even the slowest pace (and on the drop). Undeniably Ecogear have superb know-how in manufacturing artificial bait that fish find instinctively attractive. The ‘magic juice’ that these lures come suspended in clearly serves a purpose and may well be a glimpse of wider used baits of the future. 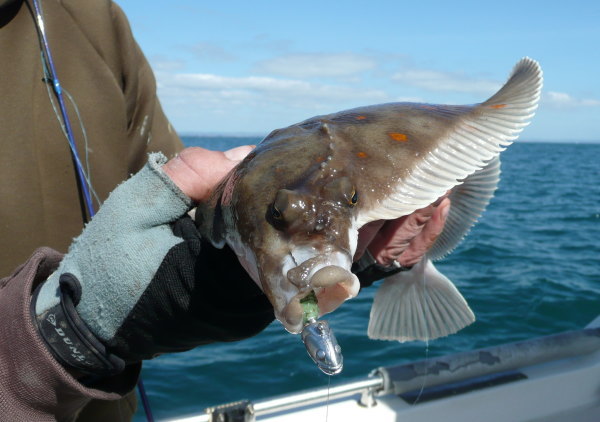 In summary, Plaice are definitely targetable by lure tactics. It feels like they are perfectly suited to the HRF discipline, being found in an average size of 1-2lb with specimens up to around 6lb. We have a long way to go to perfect our tactics and there are currently some shortcomings in the tackle market for suitable jigheads suitable for this style and venue.

Very much looking forward to the next opportunity.

If you’ve had success catching flatfish on lures, please do let us know in the comments section below.

Ecogear Aqua Milfle 3-inch lures and Marukyu Power Isome (Large) are available from www.BassLures.co.uk – get some and have a play!