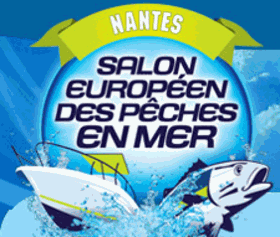 We’re 24 hours away from starting a lengthy journey. Driving down to the south coast, we’ll be catching the cross channel ferry from Portsmouth to Caen. Once in France we’ll need to drive a further 180 miles to Nantes – all this for a fishing tackle show. But to quote a friend, “if Carlsberg did fishing events, it would probably be close to the Salon European des Peche en Mer in Nantes” from the 27th to the 29th of January.

Two of us have been before – last year. It was a hugely enjoyable event for us (despite not speaking good French) and looking back, was hugely influential in the style of fishing we have taken part in for the last 12 months. Mainly, but not quite exclusively, this was the major shift towards ultra light lure fishing, or to give it its more popular title, LRF – or Light Rock Fish.

Simply, I can not remember another event that has changed my angling style by so much. It was a real eye-opener and that is why we are making the pilgrimage again this year, with one more disciple.

Having said that, the lure scene in the UK blew up in 2011 and there are now several, first class dedicated anglers, websites and tackle shops of our own, like Bass Fishing Hub. It will be interesting to see if the divide in knowledge is quite so vast this year.

On to the tackle.

Inevitably, at last year’s show, with so much amazing new tackle on offer and very little understanding to make educated purchases, we bought a lot, but without any real logic – the tackle caught the angler not the fish. However, a year on and dozens of hours now under our belts, ‘some’ of that tackle still shines today.

What follows is a list of the tackle I bought last year, that I will continue to use and recommend again and again (most of which I’m glad to say is now available in the UK).

One of the first jigheads that really gave me confidence in catching small (sometimes microscopic) fish. The hook is extra fine and super sharp. Hooking even small fish is a doddle. The fine wire can be ping’ed out of snags or straightened and gently reformed which means you’re fishing more often than tying knots. I like the ‘stand-up’ profile of the head, especially for fishing artificial worms on the bottom – a deadly technique. It presents the worm like it’s burrowing. Very natural.

Yes, I’m a Daiwa addict, but these LRF specifc jig heads have the best hook up rate of any I have used. The wire is more brittle and I have snapped at least a couple in use but the increased stiffness means hookups are amazing. The head itself may look at bit odd but after using them solidly through the year (until stocks finally depleted) I am sure that the large eye and luminous finish act as strike triggers, driving fish wild. I’ve caught fish on these when I’ve been sure I’ve lost the bait.

We fell in love with the Reins brand well before we’d got the first one wet. Such a cool, trendy brand – we had to get involved. Now, brand aside, my first opinions on the look of the Rockvibe paddletails wasn’t favourable. But looks aside I have learnt to love these lures. The material used in manufacture is super soft. While this means that you’ll get through a few, the action is fantastic. I’ve used the 2-inch in Pearl White and the 3-inch in Sardine. I’ll be replacing stocks of both for the 2012 season. My favourite cast and retrieve lure. Swims on the drop.

Another first class lure from Reins. While I prefer the Rockvibe in visible action, there’s no denying the fish I’ve caught on this lure (2.5-inch in Lemon Pepper); 4.5lb Bass, Mediterranean Dorado (unfortunately not landed – but still) & 8lb Pike. So many firsts & PBs on ultra light gear. Can’t say more than, it catches!

These hooks stayed untouched in the bag for ages but part way through my ‘journey’ I seriously got into Dropshot and these hooks played a big part in that. I’ve used other hooks for this purpose – both dedicated and carp hooks – but I keep coming back to these. Owner is quality. Each hook in the pack is perfect. They’re sharp, strong and I’m sure the red colour helps as a strike trigger – good for a hook.

I love the Illex brand but don’t see too much of it here in Britain. The Gambit Straight jigheads are an oddity – unique from my perspective. The spike, featuring a barb, holds the lure in place while a hook with a shallow gape stands proud. Definitely not suitable for weedless situations but otherwise you can be sure of ultimate hook rates. I particularly like the tiny versions. I’ve found they are great with 1-inch paddle worms for small Perch and other baby predators.

I bought my first dedicated LRF rod at the Nantes show. It was early days and despite the draw of many super sexy sticks I went budget. The decision was made easier by the superb action the rod had. It is steely. Not something I ever expected from a rod with a 1-7g rating! I’ve since learnt that this is the way the French build their rods. The Japanese equivalents have slightly more flex. Pros and cons to both, but for me, it’s been perfect. Guides are small and light, leaving the crisp action intact. The fittings are decent for a budget rod. I particularly like the hook clip that also doubles as a dropshot weight holder – a nice touch that I’d miss on other rods. The price? Sub £60!