You may not have heard of IMA before, unless you’re already reasonably interested in lure fishing. In comparison to lure manufacturers like Rapala, IMA is the new kid on the block and part of a cool, new wave of tackle manufacturers reaching our shores from Japan. The cool kids love them. Anoraks like me love them. But best of all, the fish seem to love them too. Out of a terrific range of artificials you may have heard of popular models like the IMA Sasuke, the Nabarone, or the Komomo – but they’re all plugs.

Until recently I hadn’t really acknowledge that IMA manufactured soft-plastic lures and even once I did my immediate thoughts were that they were just filling a gap in their range and trying to maximise profits off the back of a strong reputation in hard-body lures.

Luckily Top Water Lures (the UK distributor) recognised the potential and brought in some of the range. I opted for a couple of small LRF lures; the IMA Trilobite and the IMA Shirasu Snake. Very different lures but both in the 2 to 3-inch category that I prefer for ultralight fishing. 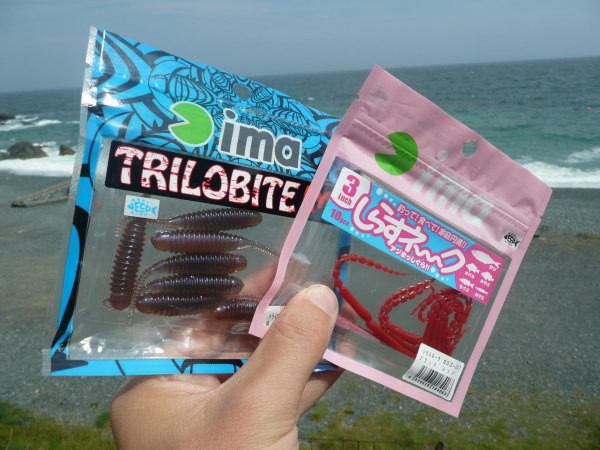 I first got to trial the IMA Trilobite, size Medium. Target species was wrasse. Even before opening the packet I could tell the lures were quality. I could see that they’d been molded very well and the level of detail in such a small lure was as good as I’ve seen. The lures are oily in nature, giving the impression that they are almost liquid – they are certainly supple. Although I haven’t had any problems, I would imagine these are the kind of lures that could melt if left in direct sunlight or mixed with other lures. Keep them tucked away in their pretty packaging and they’ll be just fine.

The Trilobite is unscented, apart from the natural smell of the material used to manufacture them. It’s not attractive to me, but it didn’t seem to put the fish off. The colour I opted for was ‘Pro Blue’. Not really blue at all. A transparent brown colour with an oily tinge that can hint at blue in some light conditions. I opted for it as it reminded me of some successful Ecogear lures I have been using. Interestingly, on receipt of the lures I noticed an Ecogear logo on the back of the packet, which I must assume means there was collaboration between the two companies, for this lure. Anyway, the Ecogear logo always stands for quality and certainly boosts my confidence. 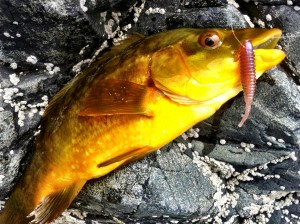 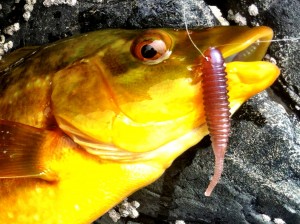 The IMA Trilobite is best described as a grub with a fine tail. They’re ribbed (for her pleasure) down the entire length. Sometimes this ribbing is to trap air on the descent, giving off a trail of bubbles, or other times it’s used to give a small lure a larger profile (bigger, more rewarding prey item) without losing the lure’s flexibility by building too thick. The ultra fine tail appears to have a life of its own, even in the packet – another good sign.

You could fish these a number of ways. This kind of lure would suit Texas or Carolina with a (small) weedless hook, or on a jighead. I like the idea of the latter, especially with the kind of jighead that elevates the lure at an angle, once sat on the sea bed. This would leave that fine tail to work its magic and entice in the fish – perhaps looking like a fleeing worm. On the test day I actually opted for dropshot which as you can see worked perfectly. I had plenty of bites and no missing tails so I’m hopeful these aren’t as fragile as they look. It was by no means an extended test but I saw enough to give me confidence and to have them as permanent fixtures in my lure bag.

In summary, the IMA Trilobite is a great quality lure that is sure to become an LRF favourite.

Next up is the unique looking IMA Shirasu Snake, a 3-inch lure with a tiny profile. Firstly a confession. Despite these being called ‘Shirasu’, which means minnow or whitebait in Japanese I wrongly identified these as worm imitations and consequently picked them in red – a favourite of mine for worm baits. Ever since I put one on a hook, dropped it in the water and flicked it about revealing the amazing action, I wish I’d chosen a fish-like colour. They’re so fine and delicate that they effectively swim around on the spot when fished vertically. Fished on a dropshot rig and twitched on a slack line the lure darts, trembles and wiggles its tail enticingly.

It’s not that these red versions don’t catch fish. In fact I caught plenty of Pouting and a Black Bream on them in testing. I’ve just got a feeling they’d be extra special in silver or pearl. 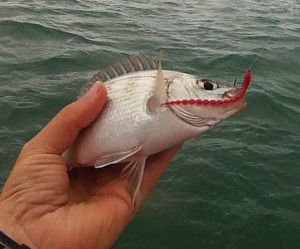 Anyway, to give you more information on the design; similarly to the previous explanation of ribbing in lure design, the Shirasu Snake achieves the same prey size versus flexibility solution in an extreme way. The head section remains thickened for perhaps 2cm, enough to get a small hook securely fastened, before tapering down to a tiny tail diameter of maybe 1 to 2mm in thickness. The illusion of a thicker profile is created by sculpting blocks of ‘body’ along the length giving this lure an extreme action from a lure that most fish will consider worthy of seizing.

However, the superb action of the ultra fine tail does come at a price. In testing, even tiny Pouting were able to break off tail sections making the remaining lure worthless. It’s not a fault of the design but it’s best for you to consider these lures as expendable. They definitely catch fish and I’m sure a few people reading this would love to catch a Black Bream on a lure – so in that respect they certainly proved their worth.

Both of these lures, plus a range of others from IMA are available online at BassLures.co.uk