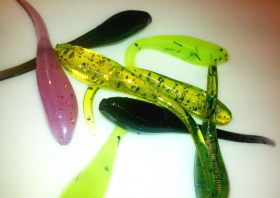 Finally got the chance to test out a batch of new lures from Jacks LRF today. I’ve wanted to try them out on the local Perch population for some time now but a frozen canal and other commitments have meant I’ve had to wait. Having said that, by the time I actually got to wet a line I had my game plan all mapped out.

Plan was to test three styles of Jacks Own lures:

I wanted to fish these ‘dropshot’ on an ultralight finesse set-up. This included 1.75 kilo fluorocarbon and a size 8 Red Owner Mosquito hook, fished about 6 inches from the weight. Logic with the short length was that the fish would be closer to the bottom after the cold snap and drop in water temperature, and that I’d be mostly fishing up and down and/or keeping the rod high (with a lower rod at range the angle of the line can fish the lure too close to the bottom)

I started with the smallest of the lures – the 1.75 inch Baby Minnow – a nicely sculpted lure with a delicate little split tail. I must say, for such a value for money lure (£3 per pack of ten) I was pleasantly surprised by the quality. Even the fragile little tails were perfectly formed with no excess material to be trimmed – fished perfect straight out the pack. They feature a slightly ribbed finish which adds to the detail. Available in a range of colours, I favoured the Chartreuse Stix for the canal.

The Baby Minnow could easily be fished on a smaller hook than the size 8 Mosquito. I trimmed a little off the front of my lure to make it fill the hook gape and stand proud – not an issue with the lure at all – just me being finicky. I’m glad to say that despite my cold hands and rusty reaction times, a couple of tiny Perch obliged. There should be a photo hereabouts showing the Baby Minnow sticking out the Perch’s mouth. You’ll notice it’s been swallowed head first. That’s a hard thing to accomplish with a jighead rigged lure, so really shows a strength in the dropshot technique and also the flexibility of the lure material used – the little Perch really wanted it. To prove this wasn’t a fluke, the second tiny Perch was hooked in an identical manner.

Action on the Baby Minnow is as you’d expect on a split tail, very skittish and erratic. I wasn’t sure how it would perform slowed down in the cold, but it worked admirably. 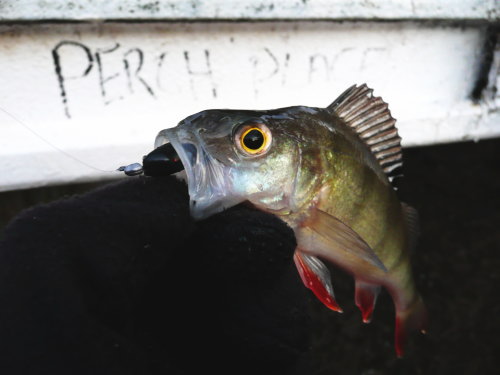 Next up was the Mega Darter, another 1.75 inch lure, most accurately described as a tadpole imitation. The only thing I’d add to that is that the tail is triangular in cross-section, with the lower side the widest. Same quality material used. No trimming required for the size 8 this time as the head of the lure is fatter.

After a play below my feet, I was disappointed with the action – or lack of it. With the profile of the tail I could see that it was designed to glide and decided that it wasn’t best suited to dropshot. I rigged the same lure with a tiny 0.3g Jazz Jighead and was really pleased with the result. There wasn’t a great deal of water fishing the margins of the canal, but the flat underside of the lure and the ultra lightweight jighead gave me a good amount of time in the strike zone. Lots of bites and one more hooked Perch.

And so I began to wonder of there were any bigger Perch around me, so I made the change back to dropshot and the last lure I was testing – the Jacks Own Sperm Tail – slightly bigger at 2.25 inch.

This was the lure I had been thinking about most while I was unable to fish. It seemed to fit my idea of a drop shot Perch lure perfectly – nice size, blunt wide head and fine tail. I wanted to fish this almost static, up and down and transmit tiny vibrations through to that tail (something I saw demonstrated particularly well in one of the lure tanks at the Nantes Tackle Show)

I had a play in the extreme margins and it looked perfect for a slow presentation. I mixed it up with a different colour this time with Purple Rayne, a transparent pink colour with red flecks. It wasn’t long before I located a shoal of fish and started catching bigger fish – most likely due to the bigger prey size and stunned action. It worked as perfectly as it had in my head. Really like these. Should become a regular in my lure bag this year.

Just to add. As the light faded I changed lure colour over to the Black Magic. It’s really nice to have an almost solid black lure in the range. This one is more like a coffee colour featuring a red and blue metallic fleck. Caught the nicest Perch of the session.

In summary, really impressed by these three lures. Great quality and value on offer with a useful range of colours. Another fine set of lures from Jacks LRF.

Jacks LRF, as the name implies, was set up to offer ultralight lures to a growing following of Light Rock Fish (LRF) anglers in the UK. While pure LRF is actually a saltwater discipline, it shares a lot of techniques with modern day Perch fishing (and continental Trout spinning). What I’ve always found a little odd is that LRF actually seems to be better serviced with innovative tackle when compared to freshwater lure stockists – despite that being the more established discipline.